PaxPrime/Seattle was a good time! I’m so glad I was able to attend even if it was just for 48 hours. And what a jam packed 48 hours of nerdtivities it was. In a previous post, I mentioned the basics about Pax, but I’ll yap about it a bit more. Pax, Penny Arcade Expo is a 3-4 day gaming convention brought to the public by the guys of Penny Arcade. Currently, there are 3 Pax events that happen worldwide. Pax Prime-in Seattle, in the Fall, PaxEast-In Boston which occurs right before Spring, and PaxAus-in Melbourne, Australia which happens in the summer. Pax Prime and Pax East are the biggest gaming conventions in North America with over 70,000 attendees. Both big names in the gaming industry and indie developers bring their new video games and consoles for the fans to have a first look and first game play on the exhibit floor. There are panels scheduled throughout the entire weekend from game companies such as Bioware and Gearbox(and tons more!), panels dedicated to crafting, community management, romance in gaming, diversity in tabletop gaming, the making of games….if it’s gaming related, you can find a panel on it at Pax. There’s also a tabletop gaming floor where you can join tournaments, purchase new games/supplies and checkout games and try them out at one of the hundreds of freeplay tables! Oh, oh, oh! There’s also the handheld lounge, console lounges (classic and present gen!), Arcade rooms, PC areas, concerts, and more. Seriously. if you ever get a chance to attend a Pax, do it!

I think Adam Sessler and the guys of Casual Friday summed up Pax pretty well in this video, “What’s so great about PAX?“. It’s a party/festival for gamers that happens both in and outside of the convention walls. I love PAX and the friendships I’ve made from it. Ahh!! I can’t wait for East! I’m getting ahead of myself. Here’s what I did in Seattle/Pax.

I arrived at 10 am on Thursday after being in airports and on planes for 7.5 hours. I was pooped, but my time was limited so I started my day! I spent the day wandering around downtown and Chinatown until I couldn’t stand any longer. Then it was on to my friend’s house to nap before the Sixth Annual Triwizard Drinking Tournament. The TWDT was a good time. I had a blast battling wizards from all 4 houses. I’d love to tell you guys I was victorious and finished all of the challenges this year, but I didn’t! I could only complete the first 3- Challenge 1: The Two Wands Drink two shots at once, Challenge 2: House Duel Pair up with an opponent from your opposing house and cast your best spell (shot), Challenge 3: Divination OWL Pair off with a partner and secretly choose rum, tequila, or vodka. If your partner correctly guesses which you’re thinking of they can take their choice of shot. If they guess incorrectly you choose which of the three they must drink. Reverse roles and repeat. I could have continued, but after 4 shots it was in my best interest to call it a night. I had a full day of Pax the next day! Anyway, 3 out of 5 ain’t bad, right…RIGHT?

I woke up bright and early on Friday to start my day at Pax. I waited in line for about an hour to get in, grabbed my loot bag, and hit the floor. The Prime floor is…actually not one floor. It’s a couple of floors and it’s so overwhelming. Wall to wall covered in everything I want to have a look at. I headed to the Sony booth first and played a couple of games on the PS Vita. I played Killzone Mercenaries and although I’m not a big fan of shooters,  I was impressed by the quality of this game on a handheld. I also played Hohokum. I had no knowledge of this game before, but when I saw it, I had to play it. It’s more of an experience than a game. You’re a snake like creature traveling through levels/worlds. There is no score, time limit, or tutorial. Developer Richard Hogg has said that the game is about “relaxing in a space and just enjoying the experience and the music, instead of trying to complete it to make progress”.  It is beautiful in the way that Journey is beautiful. Excellent visuals, score, and experience. Hohokum, Tearaway, and Flower are really doing a good job of making me want a PS Vita. While in the Sony booth I also had a look at the PS4. I didn’t get to play it (3 hour wait!), but I did watch gameplay of Killzone Shadowfall on the PS4 and it looks amazing. My short Vine of gameplay does it no justice, so do yourself a favor and Youtube some gameplay. I can’t wait to play it. AND I can’t wait to have a PS4! I visited the Nintendo booth because, duh! Nintendo! I got a photo with Pikmin and some Pikmin swag. Observed some Pokemon x/y gameplay, saw the 2DS which doesn’t look as weird as I initially thought, played Sonic Lost World on both Wii U and 3DS(It looks great and is basically a revamped classic Sonic games ), and hung out in the Nintendo lounge getting streetpasses galore! I also visited the Microsoft booth, Wizards of the coast, Behemoth…I was everywhere. SO much that I missed all of my panels. >.<  But it was worth it. Other highlights include Strife( a new MOBA coming this fall/winter) which will get it’s on post on the blog, MTG in the tabletop gaming, and my new love for League of Legends. Yep. 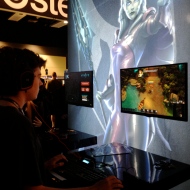 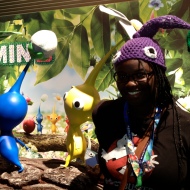 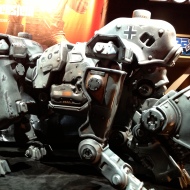 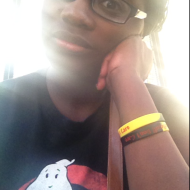 *phew* Well, that was a lot of yapping and I was only there for a day! My fourth and shortest Pax was a win. Hoping to get to PaxEast in the spring! How was your extended weekend? Did you spend it at a con?